Does 1-Androboldiol Deliver On Its Promises

sold online by Utah based Musclecore LLC it promises to deliver proven increases in testosterone of up to 42%, delivering users with increased muscle mass and strength

The Manufacturers prefer to not disclose the actual quantities of each ingredient in their formula, instead they hide the details behind that all too familiar phrase – ‘Proprietary Blend’

We can confirm that the formula includes unspecified amounts of

The suggested dose varies depending on your aims, you should take between 2 capsules 1 or 2 times per day.. it is suggested to take in the morning, and then either before intense exercise or before bed…

Despite the (to be expected) positive reviews on the official website, Independent reviews are rather mixed, we could not find many users who actually experienced much in the way of increased muscle mass and strength ( the main aims of this product) some users did however report slightly increased sex drive which would suit any man suffering the effects of low T.

There have been reports of increased anxiety, lack of sleep and problems eating after taking 1-Androboldiol for a short while. the anxiety and poor sleep could be down to the forskolin in the formula, as this is a natural stimulant, rather similar to caffeine.

You can buy 1-Androboldiol  directly from the official website, it is also found on Amazon and Ebay. prices start at $79.95 for one bottle.

Any Cash Back Guarantees

Orders from the official website are sold with a 90 day cash back guarantee, although this looks good, it only covers the first opened bottle which only actually gives you 25 ( at maximum dose) days to try and decide if its working for you.. they will of course refund for any number of unopened bottles ( less shipping and an unspecified handling charge)

This product certainly ‘talks the talk’ but the unspecified ingredient profile certainly raises more questions than it answers… certainly there are some ingredients in the mix that can potentially boost testosterone, but the only one in the formula to actually have any official clinical backing is D-Aspartic Acid…. despite the claims, no other ingredient in this mix has any official approvals or successful trials confirming their ability to boost testosterone..

The formula is missing some of the other proven test boosting ingredients including Vitamin D and also the ZMA combination ( Zinc, Magnesium and Vitamin B6)

The  unknown ingredient quantities also cause concern, the fact that it does contain DAA is immaterial when we don’t know how much is in the dose…

May suit some men with low sex drive, but experienced bodybuilders will almost certainly find it lacking on all levels….

That you look elsewhere and as a starting point, why not check out our top testosterone boosters page, these products have been chosen and rated after a close examination of their ingredients, users feedback, the possibility of side effects, guarantees (where offered) and of course price. 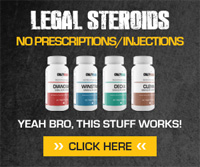 Scroll back to top


The information in this website is for advice and guidance only. It is based on my own intensive research and personal experiences, and is not intended in any way to replace professional medical advice, or to diagnose or treat any health conditions. All rights reserved.